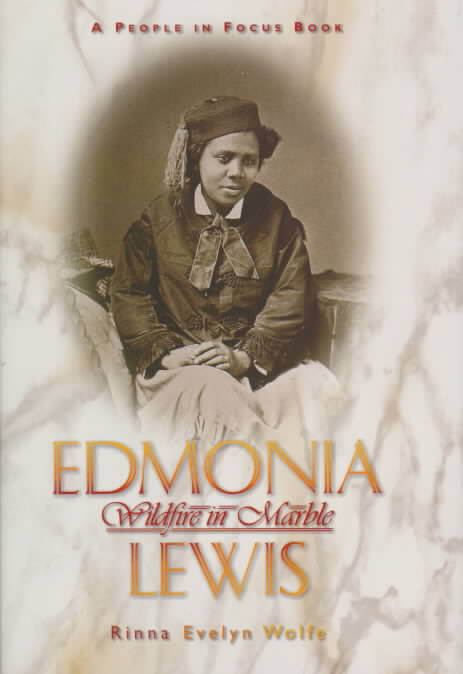 Hardcover Description:
Edmonia Lewis endured prejudice throughout her life from those who saw her as a savage native or a poor, uneducated black woman. Undaunted she worked on—and the statues she produced today salute important events in American history. Of two cultures, Chippewa, African American, Edmonia Lewis was orphaned at nine. With her brother paying the tuition she entered Oberlin College in Ohio, to attend preparatory courses (at age 15) where she took courses in Botany, Algebra, Composition, Rhetorical Literature and Bible Study. During this time her talent for drawing emerged. Edmonia Lewis created The Death of Cleopatra in 1876 for America’s First Centennial celebration. After this 3,015 pound sculpture was stored, it eventually reappeared in a Chicago saloon in 1892. Later, it became the headstone for a race horse named Cleopatra and then weathered several other adventures before it surfaced again in 1996. Today it can be seen at the National Museum of American Art (Smithsonian). Written from over 60 sources and after extensive research, Edmonia Lewis: Wildfire In Marble is the first book on Edmonia’s life. With faith in her ideals, Edmonia honored former slaves, the cause of freedom, and the nation’s courageous men and women who pushed to obtain human rights for everyone. Her statues express her deep gratitude for the gift of life. A woman ahead of her time, Edmonia Lewis was the first African American-Chippewa artist to receive international recognition and support herself through her art. EXCERPT: Forever Free was the first statue of an African American family. Again Edmonia’s kneeling slave woman is thanking God for her delivery from bondage. The man stands tall. A broken chain is wrapped around his upraised forearm. His other arm comforts the woman. The man’s pose is similar to that of a Greek sculpture (Laocoon) in the Vatican Museum. The woman’s pose was inspired by an abolitionist emblem entitled “Am I not a woman and a sister?” The couple seem dazed, as though not totally understanding that the Emancipation Proclamation had declared them forever free. Surprisingly, except for the man’s thick, curly hair, the couple did not resemble African Americans. A few critics thought their limbs awkward and not well proportioned. This statue indicated changes to come in neoclassical sculpture. Sometimes Edmonia hired stonecutters to help produce her larger figures. She borrowed $800 to have Forever Free figures executed in marble. Then she shipped the statue, along with the bills for materials and shipping costs, to the abolitionist lawyer Samuel E. Sewall in Boston. The statue’s unexpected arrival shocked the abolitionists. Although Sewall had not commissioned, or given an order for the work, he paid a customs duty of $200 to prevent its being auctioned off. In a letter to Maria Weston Chapman, aide to William Lloyd Garrison, on February 5, 1867, Edmonia wrote: “I will not take anything for my labor. Mr. Garrison has given his whole life for my father’s people and I think I might give him a few months [of my] work.”

Books similiar to Edmonia Lewis: Wildfire in Marble may be found in the categories below: