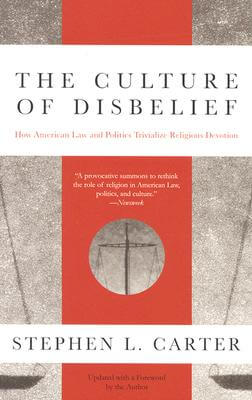 The Culture of Disbelief: How American Law and Politics Trivialize Religious Devotion
by Stephen L. Carter

Book Description:
The Culture Of Disbelief has been the subject of an enormous amount of media attention from the first moment it was published. Hugely successful in hardcover, the Anchor paperback is sure to find a large audience as the ever-increasing, enduring debate about the relationship of church and state in America continues. In The Culture Of Disbelief, Stephen Carter explains how we can preserve the vital separation of church and state while embracing rather than trivializing the faith of millions of citizens or treating religious believers with disdain. What makes Carter’s work so intriguing is that he uses liberal means to arrive at what are often considered conservative ends. Explaining how preserving a special role for religious communities can strengthen our democracy, The Culture Of Disbelief recovers the long tradition of liberal religious witness (for example, the antislavery, antisegregation, and Vietnam-era antiwar movements). Carter argues that the problem with the 1992 Republican convention was not the fact of open religious advocacy, but the political positions being advocated.

More books like The Culture of Disbelief: How American Law and Politics Trivialize Religious Devotion may be found by selecting the categories below:

Tell us what do you think about The Culture of Disbelief: How American Law and Politics Trivialize Religious Devotion.