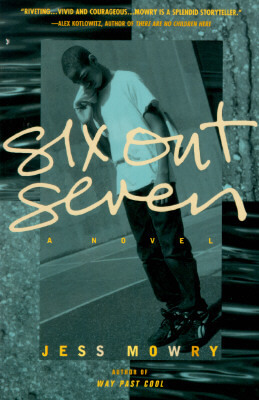 Six Out Seven: A Novel
by Jess Mowry

Book Description:
The thirteen-year-old Corbitt Wainwright’s adolescence is abruptly cut short when his father is imprisoned for attacking a white man. Tragically, dreams of success through good grades and hard work are wiped aside as white society shows him, out of both kindness and malice, that poor black kids in Mississippi don’t have much of a hand in creating their own destinies. Refusing to accept this allotted role, and after a deadly confrontation with his father’s accuser, Corbitt sets out for California, the land of opportunity and racial equality. Upon his arrival in West Oakland, a whole other world awaits. This is a world populated by gangs and crack dealers, violent cops and street kids, and one where the future seems even bleaker than it does back at home. Against the odds, he helps some of the local homeboys overcome one of their many predators and discovers the power of his African heritage. Finally, he learns to trust his own strength.

Filled with a remarkably diverse cast of characters and written with gut-wrenching immediacy, cutting-edge street slang, and a haunting lyricism, Six Out Seven is a brutally honest novel about what it means to be a black teenager in America today.

More books like Six Out Seven: A Novel may be found by selecting the categories below: