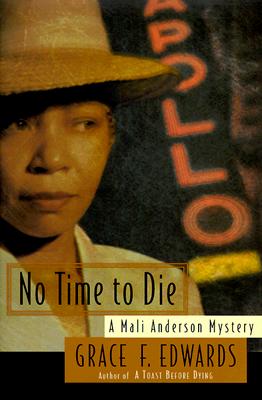 No Time to Die
by Grace Edwards

Hardcover Description:
The indomitable Harlem sleuth Mali Anderson is back, this time on a case that will become more personal than she ever imagined.

A bizarre and brutal serial killer is on the loose in Harlem, but this time he has chosen the wrong victim—Mali Anderson’s close friend Claudine Hastings. The savvy sleuth vows to track down her friend’s killer, ignoring handsome Detective Tad Honeywell’s suggestion that she leave the investigating to the police. While the body count rises, Mali refuses to back down, tirelessly combing the "three Bs of Harlem: the barbershops, beauty shops, and bars" as she zeros in on the culprit.

It soon becomes clear that the killings are centered in Mali’s own neighborhood, and she fears that the people she holds dearest, including her jazz musician father and her preteen nephew, Alvin, will become embroiled in the case. But little does Mali realize that even as she races to catch the killer, he is planning yet another crime—and he’s already chosen her to be his next victim.

The Chicago Tribune called Grace Edwards’s first mystery, If I Should Die, "excellent," and her follow-up book, A Toast Before Dying, "impressive." Now, in the third installment of the Mali Anderson mystery series, Edwards has once again painted—in the smooth and sumptuous style her many readers have come to adore—a portrait of Harlem that is both beautiful and haunting. Filled with vibrantly unforgettable characters, No Time to Die is a thrilling and suspenseful plunge into one of the world’s most fascinating neighborhoods.

More books like No Time to Die may be found by selecting the categories below: