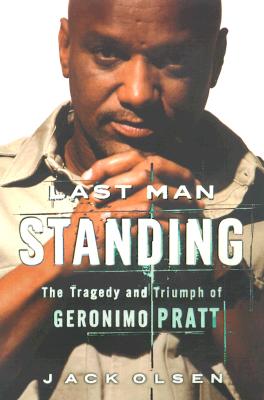 Last Man Standing: The Tragedy and Triumph of Geronimo Pratt
by Jack Olsen

Hardcover Description:
With the epic scope of A Civil Action, Last Man Standing is an unforgettable chronicle of the twenty-seven-year struggle to break a conspiratorial abuse of power and free one of America’s most famous political prisoners.

In 1968, twenty-year-old Elmer Gerard "Geronimo" Pratt returned from Vietnam with a chest full of medals and a Purple Heart into the most heated racial climate in American history. Taking advantage of the G.I. Bill, Pratt enrolled at UCLA, where the Black Panther Party was busy recruiting. Propelled by a diverse group of African Americans, the Panther agenda was a volatile mix of black rage, black pride, altruism, idealism, and violence. Under the charismatic leadership of Eldridge Cleaver, Huey P. Newton, Bobby Seale, and Bunchy Carter, Pratt rose to the rank of Deputy Minister of Defense and became leader of the Los Angeles Chapter. The Panthers did not go unnoticed by J. Edgar Hoover. In the era of enemies’ lists, his FBI drew up its own list of Panthers to be "neutralized" and began a systematic counterintelligence program to undermine black solidarity. Geronimo Pratt headed Hoover’s list. When an FBI informer within the Panther party agreed to testify that Pratt murdered a young woman at a Santa Monica tennis court, his days as a free citizen came to an end.

If not for the unlikely alliance of a brash African American defense attorney (Johnnie L. Cochran, Jr.), a radical Irish Jewish law student (Stuart Hanlon), a Protestant minister (Rev. James McCloskey), and the indefatigable Pratt-his spirit unbroken by eight years in solitary confinement-a horrifying miscarriage of justice would never have been rectified. As riveting biography, courtroom drama, and just plain narrative nonfiction, Last Man Standing is certain to take its place among the finest works of American judicial history.

More books like Last Man Standing: The Tragedy and Triumph of Geronimo Pratt may be found by selecting the categories below: