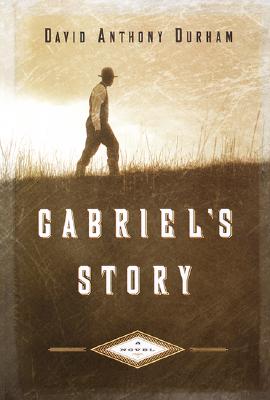 Read Our Review of Gabriel’s Story

Hardcover Description:
David Anthony Durham makes his literary debut with a haunting novel which, in the tradition of Cormac McCarthy’s All the Pretty Horses, views the American West through a refreshingly original lens.

Set in the 1870s, the novel tells the tale of Gabriel Lynch, an African American youth who settles with his family in the plains of Kansas. Dissatisfied with the drudgery of homesteading and growing increasingly disconnected from his family, Gabriel forsakes the farm for a life of higher adventure. Thus begins a forbidding trek into a terrain of austere beauty, a journey begun in hope, but soon laced with danger and propelled by a cast of brutal characters.

Durham’s accomplishment is not solely in telling one man’s story. He also gives voice to a population seldom included in our Western lore and crafts a new poetry of the American landscape. Gabriel’s Story is an important addition to the mosaic of our nation’s mythology.

More books like Gabriel’s Story may be found by selecting the categories below: