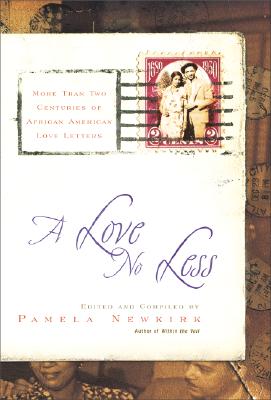 Hardcover Description:
A Delightful paean to African American love, this treasury of fifty letters written by well known figures and ordinary folk alike resonates with the joy and tenderness of romance, and offers glimpses into the social, literary, and political lives of black Americans throughout the last two centuries.

An elegantly designed volume, printed in sepia and enhanced with photographs, A LOVE NO LESS presents the letters of African American lovers of all walks of life—from slave letters to the celebrated turn-of-the-twentieth-century poet Paul Laurence Dunbar to soldiers fighting World War II, to notable entertainers, businessmen, and civic leaders. Whether they were penned by literary masters or hastily scribbled by soldiers writing home to their wives or girlfriends, the letters are eloquent expressions of the writers’ most intimate feelings and touching revelations of the things that matter most in their lives.

A LOVE NO LESS is a testament to black love and to the bonds that endure in the face of physical separation, harsh times, and personal misfortunes. It also provides a peek into the more public arena, as writers tell their lovers about their everyday activities and encounters. Paul Laurence Dunbar writes to his wife about meeting Booker T. Washington and attending a lecture by W. E. B. DuBois. Letters from the Harlem Renaissance capture the excitement and vibrancy of that extraordinary period with stories about dinners, theater parties, shows and social outings with Langston Hughes, Carl Van Vechten and other luminaries. In a letter to her new husband written in the 1930s, stage and screen star Fredi Washington describes seeing a stereo for the first time and recounts her negotiations for a role in a Paramount film.

An enchanting and inspiring look at the power of love to transform and sustain, A LOVE NO LESS is the perfect gift for Valentines Day, anniversaries, birthdays, and weddings, a book that everyone who has ever been in love will treasure.

More books like A Love No Less: Two Centuries Of African American Love Letters may be found by selecting the categories below: