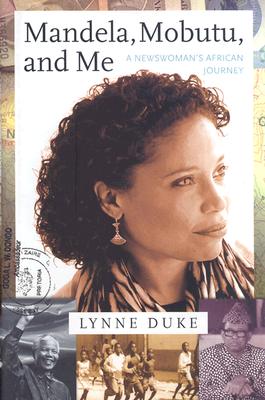 Mandela, Mobutu, and Me: A Newswoman’s African Journey
by Lynne Duke

Hardcover Description:
In this stunning memoir, veteran Washington Post correspondent Lynne Duke takes readers on a wrenching but riveting journey through Africa during the pivotal 1990s and brilliantly illuminates a continent where hope and humanity thrive amid unimaginable depredation and horrors.

For four years as her newspaper’s Johannesburg bureau chief, Lynne Duke cut a rare figure as a black American woman foreign correspondent as she raced from story to story in numerous countries of central and southern Africa. From the battle zones of Congo-Zaire to the quest for truth and reconciliation in South Africa; from the teeming displaced person’s camps of Angola and the killing field of the Rwanda genocide to the calming Indian Ocean shores of Mozambique. She interviewed heads of state, captains of industry, activists, tribal leaders, medicine men and women, mercenaries, rebels, refugees, and ordinary, hardworking people. And it is they, the ordinary people of Africa, who fueled the hope and affection that drove Duke’s reporting. The nobility of the ordinary African struggles, so often absent from accounts of the continent, is at the heart of Duke’s searing story.

MANDELA, MOBUTU, AND ME is a richly detailed, clear-eyed account of the hard realities Duke discovered, including the devastation wrought by ruthless, rapacious dictators like Mobutu Sese Seko and his successor, Laurent Kabila, in the Congo, and appalling indifference of Europeans and Americans to the legacy of their own exploitation of the continent and its people. But Duke also records with admiration the visionary leadership and personal style of Nelson Mandela in south Africa as he led his country’s inspiring transition from apartheid in the twilight of his incredible life.

Whether it was touring underground gold and copper mines, learning to carry water on her head, filing stories by flashlight or dodging gunmen, Duke’s tour of Africa reveals not only the spirit and travails of an amazing but troubled continent — it also explores the heart and fearlessness of a dedicated journalist.

More books like Mandela, Mobutu, and Me: A Newswoman’s African Journey may be found by selecting the categories below: