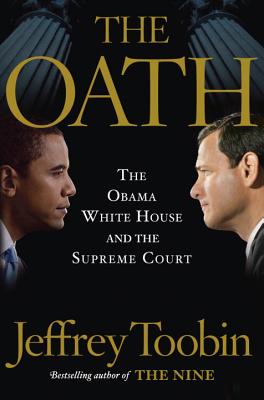 The Oath: The Obama White House and The Supreme Court
by Jeffrey Toobin

Book Description:From the prizewinning author of The Nine, a gripping insider’s account of the momentous ideological war between the John Roberts Supreme Court and the Obama administration. From the moment John Roberts, the chief justice of the United States, blundered through the Oath of Office at Barack Obama’s inauguration, the relationship between the Supreme Court and the White House has been confrontational. Both men are young, brilliant, charismatic, charming, determined to change the course of the nation and completely at odds on almost every major constitutional issue. One is radical; one essentially conservative. The surprise is that Obama is the conservative a believer in incremental change, compromise, and pragmatism over ideology. Roberts and his allies on the Court seek to overturn decades of precedent: in short, to undo the ultimate victory FDR achieved in the New Deal.

This ideological war will crescendo during the 2011-2012 term, in which several landmark cases are on the Court’s docket most crucially, a challenge to Obama’s controversial health-care legislation. With four new justices joining the Court in just five years, including Obama’s appointees Sonia Sotomayor and Elena Kagan, this is a dramatically and historically different Supreme Court, playing for the highest of stakes.

No one is better positioned to chronicle this dramatic tale than Jeffrey Toobin, whose prize-winning bestseller The Nine laid bare the inner workings and conflicts of the Court in meticulous and entertaining detail. As the nation prepares to vote for President in 2012, the future of the Supreme Court will also be on the ballot.

More books like The Oath: The Obama White House and The Supreme Court may be found by selecting the categories below:

Tell us what do you think about The Oath: The Obama White House and The Supreme Court.