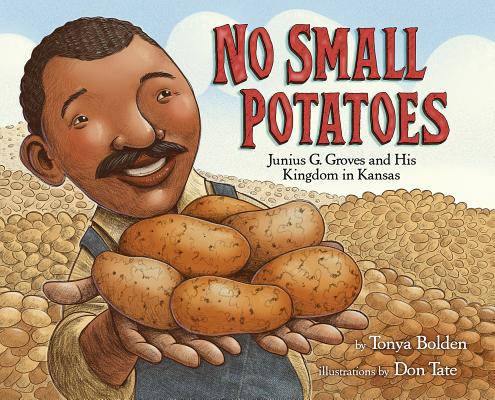 No Small Potatoes: Junius G. Groves and His Kingdom in Kansas
by Tonya Bolden, Illustrated by Don Tate

Hardcover Description:
Discover the incredible true story of how one of history’s most successful potato farmers began life as a slave and worked until he was named the "Potato King of the World"!

Junius G. Groves came from humble beginnings in the Bluegrass State. Born in Kentucky into slavery, freedom came when he was still a young man and he intended to make a name for himself. Along with thousands of other African Americans who migrated from the South, Junius walked west and stopped in Kansas. Working for a pittance on a small potato farm was no reason to feel sorry for himself, especially when he’s made foreman. But Junius did dream of owning his own farm, so he did the next best thing. He rented the land and worked hard! As he built his empire, he also built a family, and he built them both on tons and tons and tons of potatoes. He never quit working hard, even as the naysayers doubted him, and soon he was declared Potato King of the World and had five hundred acres and a castle to call his own.

From award winning author Tonya Bolden and talented illustrator Don Tate comes a tale of perseverance that reminds us no matter where you begin, as long as you work hard, your creation can never be called small potatoes.

More books like No Small Potatoes: Junius G. Groves and His Kingdom in Kansas may be found by selecting the categories below: