Beneath The Lion’s Gaze: A Novel by Maaza Mengiste 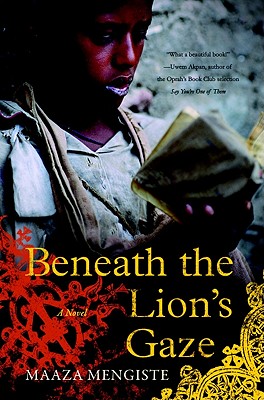 Beneath The Lion’s Gaze: A Novel
by Maaza Mengiste

Book Description:
An epic tale of a father and two sons, of betrayals and loyalties, of a family unraveling in the wake of Ethiopia’s revolution. This memorable, heartbreaking story opens in Addis Ababa, Ethiopia, 1974, on the eve of a revolution. Yonas kneels in his mother’s prayer room, pleading to his god for an end to the violence that has wracked his family and country. His father, Hailu, a prominent doctor, has been ordered to report to jail after helping a victim of state-sanctioned torture to die. And Dawit, Hailu’s youngest son, has joined an underground resistance movement—a choice that will lead to more upheaval and bloodshed across a ravaged Ethiopia.

Beneath the Lion’s Gaze tells a gripping story of family, of the bonds of love and friendship set in a time and place that has rarely been explored in fiction. It is a story about the lengths human beings will go in pursuit of freedom and the human price of a national revolution. Emotionally gripping, poetic, and indelibly tragic, Beneath The Lion’s Gaze is a transcendent and powerful debut.

More books like Beneath The Lion’s Gaze: A Novel may be found by selecting the categories below: