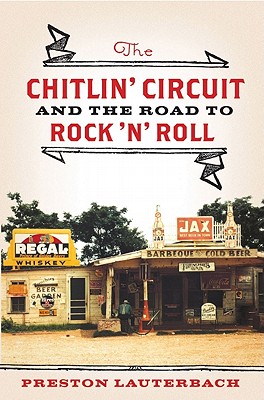 The Chitlin’ Circuit: And The Road To Rock &rsquoN’ Roll
by Preston Lauterbach

Read Our Review of The Chitlin’ Circuit: And The Road To Rock &rsquoN’ Roll

The first history of the network of black juke joints that spawned rock ’n’ roll through an unholy alliance between vice and entertainment. A definitive account of the birth of rock ’n’ roll in black America, this book establishes the Chitlin’ Circuit as a major force in American musical history. Combining terrific firsthand reporting with deep historical research, Preston Lauterbach uncovers characters like Chicago Defender columnist Walter Barnes, who pioneered the circuit in the 1930s, and larger-than-life promoters such as Denver Ferguson, the Indianapolis gambling chieftain who consolidated it in the 1940s. Charging from Memphis to Houston and now-obscure points in between, The Chitlin’ Circuit brings us into the sweaty back rooms where such stars as James Brown, B. B. King, and Little Richard got their start. With his unforgettable portraits of unsung heroes including King Kolax, Sax Kari, and Clarence "Gatemouth" Brown, Lauterbach writes of a world of clubs and con men that has managed to avoid much examination despite its wealth of brash characters, intriguing plotlines, and vulgar glory, and gives us an excavation of an underground musical America. 34 black-and-white illustrations

More books like The Chitlin’ Circuit: And The Road To Rock &rsquoN’ Roll may be found by selecting the categories below: