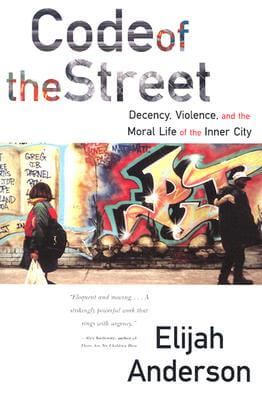 Code Of The Street: Decency, Violence, And The Moral Life Of The Inner City
by Elijah Anderson

Book Description:
Unsparing and important. . . . An informative, clearheaded and sobering book.?Jonathan Yardley, Washington Post (1999 Critic’s Choice) Inner-city black America is often stereotyped as a place of random violence, but in fact, violence in the inner city is regulated through an informal but well-known code of the street. This unwritten set of rules?based largely on an individual’s ability to command respect?is a powerful and pervasive form of etiquette, governing the way in which people learn to negotiate public spaces. Elijah Anderson’s incisive book delineates the code and examines it as a response to the lack of jobs that pay a living wage, to the stigma of race, to rampant drug use, to alienation and lack of hope.

More books like Code Of The Street: Decency, Violence, And The Moral Life Of The Inner City may be found by selecting the categories below: