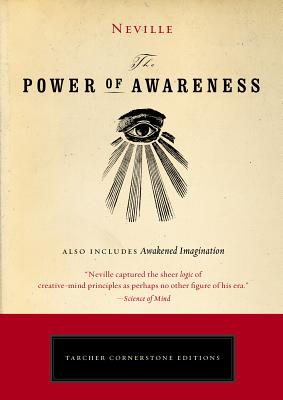 The Power of Awareness
by Neville Goddard

A beautiful edition of one of the twentieth century’s most powerful and intriguing works on how to use the manifesting powers of your mind. Features the bonus book, Awakened Imagination.

Here is a signature volume of one of the most quietly impactful and radical works ever written on the creative potentialities of human thought, The Power of Awareness. In this book, author Neville presents a concise, unforgettable statement of his core philosophy: that the world around you is a picture in your mind’s eye, created by your thinking, and susceptible to change by altering your thoughts and feelings.

Originally published in 1952, The Power of Awareness not only prefigured the revolution in mind-power metaphysics, but surpassed it. Before the public had heard about quantum physics experiments (popularized in our own time through movies such as The Secret and What the Bleep Do We Know!?), Neville was conveying the unheard-of message that reality is directly impacted by the perspective and consciousness of the observer himself. Moreover, he wrote, each of us is ultimately responsible for, and capable of reshaping, the outer circumstances we perceive.

Neville’s authorial genius is his ability to deliver these ideas in an immensely readable and enjoyable way. Like few other metaphysical figures of his era, Neville captured complexities in simple stories, memorable examples, and practical advice. His books are unfailingly brief and easy to read, because his command of his material is so masterly and complete.

The Power of Awareness also includes a special bonus work, Awakened Imagination, originally published in 1954. This two-in-one volume forms a brilliant introduction and user’s guide to the practical philosophy of a great spiritual thinker.