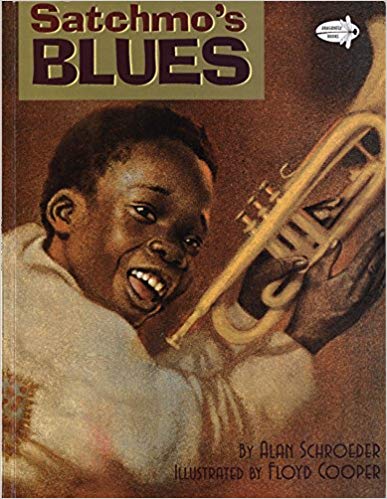 On hot summer nights in New Orleans, a boy named Louis Armstrong would peek under the big swinging doors of Economy Hall and listen to the jazz band. The best night was Friday, when Bunk Johnson would blow his cornet till the roof trembled. At moments like those, Louis could feel his toes tingle. He wanted to be like Bunk Johnson; aim his horn straight up at the night sky and set the stars spinning.

One day Louis saw a horn in a pawnshop window--a real brass cornet. The cardboard sign said $5. How could he ever come up with that much money? Every day Louis did what he could to earn that five dollars, and every day he practiced blowing his imaginary horn. It was a dream he would never give up.

The vibrant, swinging world of New Orleans jazz seems to bounce off the pages in this tribute to an extraordinary young man. Louis Armstrong’s dynamic personality and amazing trumpet playing would cast a spell on millions of people around the world, to whom he will always be the one and only Satchmo, the Ambassador of Jazz.

More books like Satchmo’s Blues may be found by selecting the categories below: