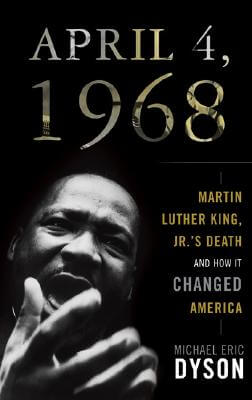 Book Description:
On April 4, 1968, at 6:01 PM, while he was standing on a balcony at a Memphis hotel, Martin Luther King, Jr. was shot and fatally wounded. Only hours earlier King?the prophet for racial and economic justice in America?ended his final speech with the words, ?I may not get there with you, but I want you to know tonight, that we as a people will get to the Promised Land.”

Acclaimed public intellectual and best-selling author Michael Eric Dyson uses the fortieth anniversary of King’s assassination as the occasion for a provocative and fresh examination of how King fought, and faced, his own death, and we should use his death and legacy. Dyson also uses this landmark anniversary as the starting point for a comprehensive reevaluation of the fate of Black America over the four decades that followed King’s death. Dyson ambitiously investigates the ways in which African-Americans have in fact made it to the Promised Land of which King spoke, while shining a bright light on the ways in which the nation has faltered in the quest for racial justice. He also probes the virtues and flaws of charismatic black leadership that has followed in King’s wake, from Jesse Jackson to Barack Obama.

Always engaging and inspiring, April 4, 1968 celebrates the prophetic leadership of Dr. King, and challenges America to renew its commitment to his deeply moral vision.

More books like April 4, 1968: Martin Luther King Jr.’s Death And How It Changed America may be found by selecting the categories below:

Tell us what do you think about April 4, 1968: Martin Luther King Jr.’s Death And How It Changed America.