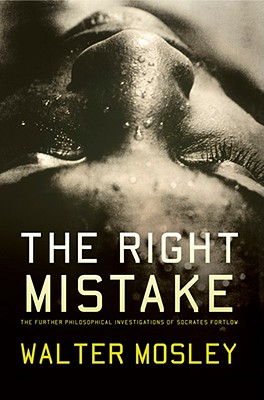 The Right Mistake: The Further Philosophical Investigations of Socrates Fortlow
by Walter Mosley

Read Our Review of The Right Mistake: The Further Philosophical Investigations of Socrates Fortlow

Living in South Central L.A., Socrates Fortlow is a sixty-year-old ex-convict, still strong enough to kill men with his bare hands. Now freed after serving twenty-seven years in prison, he is filled with profound guilt about his own crimes and disheartened by the chaos of the streets. Along with his gambler friend Billy Psalms, Socrates calls together local people of all races from their different social stations—lawyers, gangsters, preachers, Buddhists, businessmen—to conduct meetings of a Thinkers’ Club, where all can discuss the unanswerable questions in life.The street philosopher enjoins his friends to explore—even in the knowledge that there’s nothing that they personally can do to change the ways of the world—what might be done anyway, what it would take to change themselves. Infiltrated by undercover cops, and threatened by strain from within, tensions rise as hot-blooded gangsters and respectable deacons fight over issues of personal and social responsibility. But simply by asking questions about racial authenticity, street justice, infidelity, poverty, and the possibility of mutual understanding, Socrates and his unlikely crew actually begin to make a difference.In turns outraged and affectionate, The Right Mistake offers a profoundly literary and ultimately redemptive exploration of the possibility of moral action in a violent and fallen world.

More books like The Right Mistake: The Further Philosophical Investigations of Socrates Fortlow may be found by selecting the categories below: