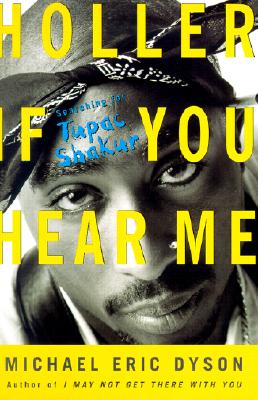 Holler If You Hear Me: Searching For Tupac Shakur
by Michael Eric Dyson

Hardcover Description:
Acclaimed for his writings on Malcolm X and Martin Luther King, Jr., as well as his passionate defense of black youth culture, Michael Eric Dyson has emerged as the leading African American intellectual of his generation. Now Dyson turns his attention to one of the most enigmatic figures of the past decade: the slain hip-hop artist Tupac Shakur.Five years after his murder, Tupac remains a widely celebrated, deeply loved, and profoundly controversial icon among black youth. Viewed by many as a "black James Dean," he has attained cult status partly due to the posthumous release of several albums, three movies, and a collection of poetry. But Tupac endures primarily because of the devotion of his loyal followers, who have immortalized him through tributes, letters, songs, and celebrations, many in cyberspace.Dyson helps us to understand why a twenty-five-year-old rapper, activist, poet, actor, and alleged sex offender looms even larger in death than he did in life. With his trademark skills of critical thinking and storytelling, Dyson examines Tupac’s hold on black youth, assessing the ways in which different elements of his persona-thug, confused prophet, fatherless child-are both vital and destructive. At once deeply personal and sharply analytical, Dyson’s book offers a wholly original way of looking at Tupac Shakur that will thrill those who already love the artist and enlighten those who want to understand him."In the tradition of jazz saxophonists John Coltrane and Charlie Parker, Dyson riffs with speed, eloquence, bawdy humor, and startling truths that have the effect of hitting you like a Mack truck."-San Francisco Examiner"Such is the genius of Dyson. He flows freely from the profound to the profane, from popular culture to classical literature."-Washington Post"A major American thinker and cultural critic."-Philadelphia Inquirer"Among the young black intellectuals to emerge since the demise of the civil rights movement…undoubtedly the most insightful and thought-provoking is Michael Eric Dyson."-Manning Marable, Director of African American Studies, Columbia University

Books similiar to Holler If You Hear Me: Searching For Tupac Shakur may be found in the categories below: