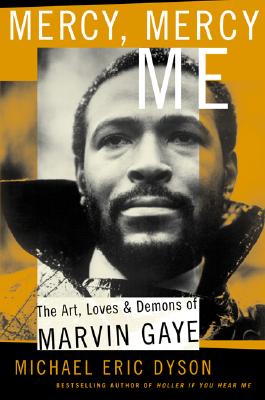 Mercy, Mercy Me: The Art, Loves and Demons of Marvin Gaye
by Michael Eric Dyson

Book Description:The best-selling Motown artist of all time, Marvin Gaye defined the hopes and shattered dreams of an entire generation. Twenty years after his tragic death-he was shot by his father-his relevance persists because of the indelible mark his outsized talent left on American culture. A transcendent performer whose career spanned the history of rhythm and blues, from doo-wop to the sultriest of soul music, Gaye’s artistic scope and emotional range set the soundtrack for America’s tumultuous coming of age in the 1970s. Michael Eric Dyson’s searching narrative illuminates Marvin Gaye’s stellar ascendance-from a black church in Washington, D.C., to the artistic peak of What’s Going On?-and charts his sobering personal decline. Dyson draws from interviews with those closest to Gaye to paint an intimate portrait of the tensions and themes that shaped contemporary urban America: racism, drug abuse, economic adversity, and the long legacy of hardship. Gaye’s stormy relationships with women, including duet partner Tammi Terrell and wives Anna Gordy and Janis Hunter, are examined in light of the sexual revolution of the 1960s and 1970s. Dyson also considers family violence in the larger context of the African-American life and how that heartbreaking legacy resulted in Gaye’s murder. Mercy, Mercy, Me is an unforgettable portrait of a beloved black genius whose art is reflected in the dynamism of contemporary urban America.

More books like Mercy, Mercy Me: The Art, Loves and Demons of Marvin Gaye may be found by selecting the categories below:

Tell us what do you think about Mercy, Mercy Me: The Art, Loves and Demons of Marvin Gaye.