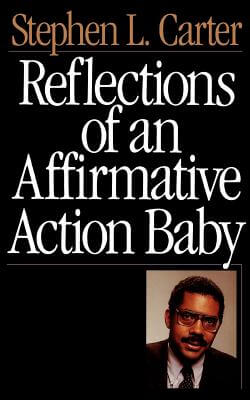 Reflections Of An Affirmative Action Baby
by Stephen L. Carter

Book Description:
In a climate where whites who criticize affirmative action risk being termed racist and blacks who do the same risk charges of treason and self hatred, a frank and open discussion of racial preference is difficult to achieve. But, in the first book on racial preference written from personal experience, Reflections of an Affirmative Action Baby, Stephen L. Carter, Cromwell Professor of Law at Yale University and self-described beneficiary (and, at times, victim) of affirmative action, does it.Using his own story of success and frustration as ?an affirmative action baby” as a point of departure, Carter, who has risen to the top of his profession, provides an incisive analysis of one of the most incendiary topics of our day?as well as an honest critique of the pressures on black professionals and intellectuals to conform to the ?politically correct” way of being black.Affirmative action as it is practiced today not only does little to promote racial equality, Carter argues, but also allows the nation to escape rather cheaply from its moral obligation to undo the legacy of slavery. Affirmative action, particularly in hiring often reinforces racist stereotypes by promoting the idea that the black professional cannot aspire to anything more than being ?the best black.”Has the time come to abandon these programs? No—but affirmative action must return to its simpler roots, Carter argues: to provide educational opportunities for those who might not otherwise have them. Then the beneficiaries should demand to be held to the same standards as anyone else.

More books like Reflections Of An Affirmative Action Baby may be found by selecting the categories below:

Tell us what do you think about Reflections Of An Affirmative Action Baby.