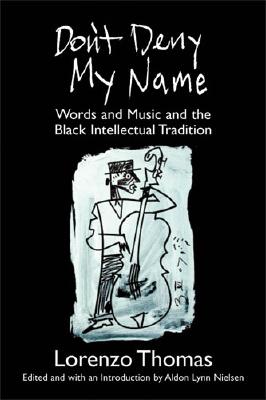 Don’t Deny My Name: Words and Music and the Black Intellectual Tradition
by Lorenzo Thomas

Book Description:
Black musical forms profoundly influenced the work of American poet and leading literary figure Lorenzo Thomas, and he wrote about them with keen insight-and obvious pleasure. This book, begun by Thomas before his death in 2005, collects more than a dozen of his savvy yet engagingly personal essays that probe the links between African American music, literature, and popular culture, from the Harlem Renaissance to the present.Don’t Deny My Name (which takes its title from a blues song by Jelly Roll Morton) begins by laying out the case that the blues is a body of literature that captured the experience of African American migrants to the urban North and newer territories to the West. The essays that follow collectively provide a tour of the movement through classic jazz, bop, and the explosions of the free jazz era, followed by a section on R&B and soul. The penultimate essay is a meditation on rap music that attempts to bring together the extremes of emotion that hip hop elicits, and the collection ends with an unfinished preface to the volume.

More books like Don’t Deny My Name: Words and Music and the Black Intellectual Tradition may be found by selecting the categories below: