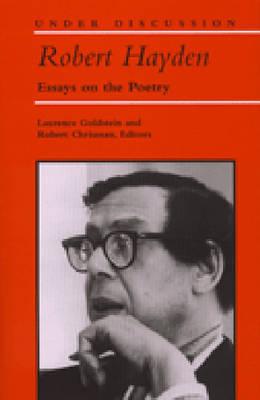 Robert Hayden: Essays On The Poetry (Under Discussion)
by Laurence Goldstein and Robert Chrisman

Book Description:
This collection of essays by leading critics and poets charts Robert Hayden’s growing reputation as a major writer of some of the twentieth century’s most important poems on African-American themes, including the famed “Middle Passage” and “Frederick Douglass.” The essays illuminate the themes and techniques that established Hayden as a modernist writer with affinities to T. S. Eliot, Federico Garcia Lorca, and W. B. Yeats, as well as to traditions of African-American writings that include such figures as Countee Cullen and Langston Hughes. Robert Hayden: Essays on the Poetry is the first and only book to collect significant essays on this distinguished poet. Covering sixty years of commentary, book reviews, essays, and Hayden’s own published materials, this volume is an invaluable contribution to our understanding of the poet’s vision of experience, artistry, and influence. The book includes forty different works that examine the life and poetry of Hayden, the first African-American to serve as Consultant in Poetry to the Library of Congress (the post now called Poet Laureate) and to receive the Grand Prix de la Poesie at the First World Festival of Negro Arts, Dakar, Senegal, in 1966.

More books like Robert Hayden: Essays On The Poetry (Under Discussion) may be found by selecting the categories below:

Tell us what do you think about Robert Hayden: Essays On The Poetry (Under Discussion).