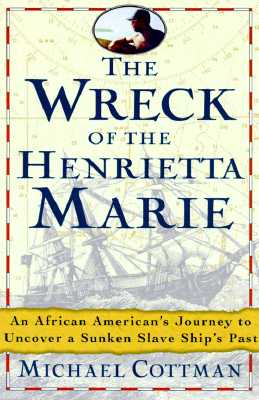 The Wreck of the Henrietta Marie: An African American’s Spiritual Journey to Uncover a Sunken Slave Ship’s Past
by Michael H. Cottman

Book Description:When prize-winning journalist and avid scuba diver Michael Cottman participated in an underwater expedition to survey the sunken wreck of a slave ship off the coast of Florida, he was overwhelmed by powerful feelings of kinship and oneness with his African ancestors. As he held in his hands the very shackles that once had bound men, women, and children in their tortured passage from their African homeland to America, Michael Cottman became determined to tell their stories and the story behind the ship that had carried them away from all they knew and loved. The Wreck of the Henrietta Marie is a fascinating look at one man’s quest to reconstruct the journey of a British slave ship with all the detail and accuracy available to us at the end of the twentieth century.
The Wreck of the Henrietta Marie takes readers back three centuries and to three continents in order to trace the complex and moving story of the slaves and the slavers. We travel to England on the trail of the shipbuilders and the captain and his crew; to Goree Island, located off the westernmost extension of the African continent near Dakar, where the ship almost certainly sailed past and from which its enslaved passengers would have gotten their last view of their homeland; and to the Gulf of Mexico, where the Henrietta Marie sank without a trace—until its recent rediscovery gave us a tangible key to one of history’s most terrible episodes.
The Wreck of the Henrietta Marie is a powerful and compelling testament of one man’s attempt to make sense of the history of his ancestors, chronicling his journey while confronting questions with no answers and striving for reconciliation with his homeland’s past and his owncountry’s future.
From The Wreck of the Henrietta Marie
When the ships dropped anchor, the African villagers, their curiosity aroused, approached the pale men with stringy hair who had rowed ashore. The seamen quickly overpowered at least a dozen people, loaded them into longboats and sailed away.
These strong-arm raids didn’t last long. They ultimately evolved into the more routine capturing and trading for Africans, as Europeans were fast to establish a formal system by persuading some African kings and chiefs to capture their own people and sell them into slavery.
For long periods after the abductions, some of the children from the villages would climb the tallest trees to watch for the return of the great Portuguese ships that had snaked their way along the Rio Real—ships with long guns aimed at the shore; ships with tall sails that snapped in the breeze; dark ships that creaked in the tide; ships that brought chaos and fear and always left death in their wakes.
Calm would become only a memory for the people of the West African villages. Lives would be lost in the steady state of terror called slavery.
A life of peace had been stolen from these African families. Those taken were stripped of their titles, and even their names, snatched away from everything familiar. No one was safe from slavery—not the smallest children, not the mightiest warrior.
And so, the people of these villages along the west coast of Africa could only embrace their children, comfort each other, and wait for the ships to come.

More books like The Wreck of the Henrietta Marie: An African American’s Spiritual Journey to Uncover a Sunken Slave Ship’s Past may be found by selecting the categories below: