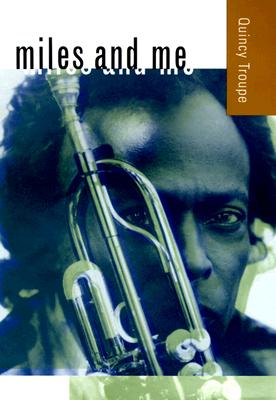 Miles and Me
by Quincy Troupe

Read Our Review of Miles and Me

Book Description:
Quincy Troupe’s candid account of his friendship with Miles Davis is a revealing portrait of a great musician and an intimate study of a unique relationship. It is also an engrossing chronicle of the author’s own development, both artistic and personal. As Davis’s collaborator on Miles: The Autobiography,Troupe—one of the major poets to emerge from the 1960s—had exceptional access to the musician. This memoir goes beyond the life portrayed in the autobiography to describe in detail the processes of Davis’s spectacular creativity and the joys and difficulties his passionate, contradictory temperament posed to the men’s friendship. It shows how Miles Davis, both as a black man and an artist, influenced not only Quincy Troupe but whole generations.

Troupe has written that Miles Davis was "irascible, contemptuous, brutally honest, ill-tempered when things didn’t go his way, complex, fair-minded, humble, kind and a son-of-a-bitch." The author’s love and appreciation for Davis make him a keen, though not uncritical, observer. He captures and conveys the power of the musician’s presence, the mesmerizing force of his personality, and the restless energy that lay at the root of his creativity. He also shows Davis’s lighter side: cooking, prowling the streets of Manhattan, painting, riding his horse at his Malibu home. Troupe discusses Davis’s musical output, situating his albums in the context of the times—both political and musical—out of which they emerged. Miles and Me is an unparalleled look at the act of creation and the forces behind it, at how the innovations of one person can inspire both those he knows and loves and the world at large.

More books like Miles and Me may be found by selecting the categories below: