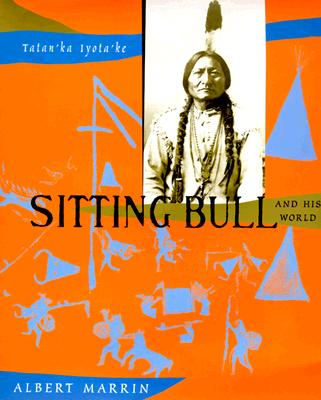 Sitting Bull and His World
by Albert Marrin

Hardcover Description:
Richly researched, told with sweep, speed, and balance, here is a biography of the man who was arguably the Plains Indians’ most revered, most visionary leader. Tatan’ka Iyota’ke—Sitting Bull—was the great Hunkpapa Lakota chief who helped defeat Custer at the Battle of the Little Bighorn. But more than that, he was a profound holy man and seer, an astute judge of men, a singer and speaker for his people’s ways. In the face of the army, the railroad, the discovery of gold, and the decimation of the buffalo, he led his band to Canada rather than “come in” to the white man’s reservation. To render Sitting Bull in context, the author explores the differences in white and Indian cultures in the nineteenth century and shows the forces at work—economic pressure, racism, technology, post-Civil War politics in Washington and in the army—that led to the creation of a continental nation at the expense of a whole people.

Illustrated with photographs and drawings by Albert Marrini

More books like Sitting Bull and His World may be found by selecting the categories below: