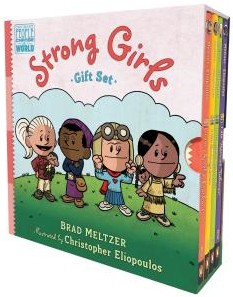 Hardcover Description:
Brad Meltzer is the author of the New York Times bestselling Ordinary People Change the World series for children, as well as six New York Times bestselling thrillers for adults: The Tenth Justice, Dead Even, The First Counsel, The Millionaires, The Zero Game, and The Book of Fate. He is also the #1 bestselling author of the critically acclaimed comic books Identity Crisis and Justice League of America, and is the cocreator of the TV series Jack & Bobby. A graduate of the University of Michigan and Columbia Law School, he lives in Florida. To learn more, visit bradmeltzer.com. Christopher Eliopoulos began his illustration career as a letterer for Marvel and has worked on thousands of comics, including Franklin Richards: Son of a Genius, Pet Avengers, and Cow Boy, all of which he wrote and illustrated. He is the illustrator of the New York Times-bestselling Ordinary People Change the World series of picture book biographies. He lives in New Jersey with his wife and their identical twin sons.

More books like Strong Girls Gift Set may be found by selecting the categories below: