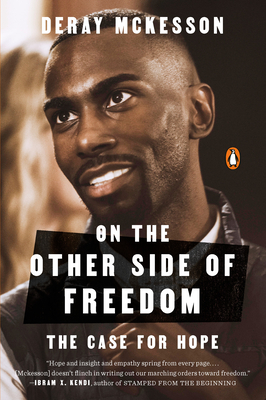 On the Other Side of Freedom: The Case for Hope
by DeRay Mckesson

Paperback Description:
"On the Other Side of Freedom reveals the mind and motivations of a young man who has risen to the fore of millennial activism through study, discipline, and conviction. His belief in a world that can be made better, one act at a time, powers his narratives and opens up a view on the costs, consequences, and rewards of leading a movement."—Henry Louis Gates, Jr.

From the internationally recognized civil rights activist/organizer and host of the podcast Pod Save the People, a meditation on resistance, justice, and freedom, and an intimate portrait of a movement from the front lines.

In August of 2014, twenty-nine-year-old activist DeRay Mckesson stood with hundreds of others on the streets of Ferguson, Missouri, to push a message of justice and accountability. These protests, and others like them in cities across the country, resulted in the birth of the Black Lives Matter movement. Now, in his first book, Mckesson lays out the intellectual, pragmatic political framework for a new liberation movement. Continuing a conversation about activism, resistance, and justice that embraces our nation’s complex history, he dissects how deliberate oppression persists, how racial injustice strips our lives of promise, and how technology has added a new dimension to mass action and social change. He argues that our best efforts to combat injustice have been stunted by the belief that racism’s wounds are history, and suggests that intellectual purity has curtailed optimistic realism. The book offers a new framework and language for understanding the nature of oppression. With it, we can begin charting a course to dismantle the obvious and subtle structures that limit freedom.

Honest, courageous, and imaginative, On the Other Side of Freedom is a work brimming with hope. Drawing from his own experiences as an activist, organizer, educator, and public official, Mckesson exhorts all Americans to work to dismantle the legacy of racism and to imagine the best of what is possible. Honoring the voices of a new generation of activists, On the Other Side of Freedom is a visionary’s call to take responsibility for imagining, and then building, the world we want to live in.

Books similiar to On the Other Side of Freedom: The Case for Hope may be found in the categories below: