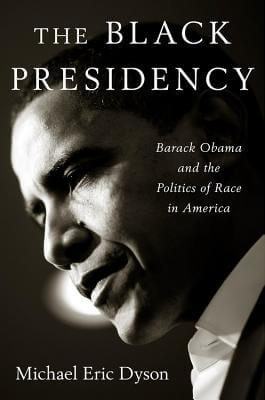 The Black Presidency: Barack Obama and the Politics of Race in America
by Michael Eric Dyson

Hardcover Description:
A provocative and lively deep dive into the meaning of America’s first black presidency, from “one of the most graceful and lucid intellectuals writing on race and politics today” (Vanity Fair).

Michael Eric Dyson explores the powerful, surprising way the politics of race have shaped Barack Obama’s identity and groundbreaking presidency. How has President Obama dealt publicly with race—as the national traumas of Tamir Rice, Trayvon Martin, Michael Brown, Eric Garner, Freddie Gray, and Walter Scott have played out during his tenure? What can we learn from Obama’s major race speeches about his approach to racial conflict and the black criticism it provokes?

Dyson explores whether Obama’s use of his own biracialism as a radiant symbol has been driven by the president’s desire to avoid a painful moral reckoning on race. And he sheds light on identity issues within the black power structure, telling the fascinating story of how Obama has spurned traditional black power brokers, significantly reducing their leverage.

President Obama’s own voice—from an Oval Office interview granted to Dyson for this book—along with those of Eric Holder, Al Sharpton, Jesse Jackson, Andrew Young, and Maxine Waters, among others, add unique depth to this profound tour of the nation’s first black presidency.

More books like The Black Presidency: Barack Obama and the Politics of Race in America may be found by selecting the categories below: