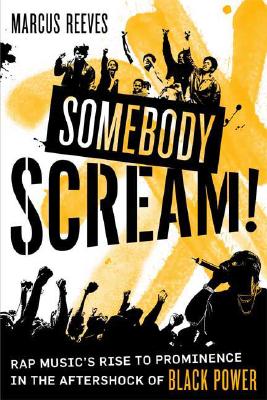 Somebody Scream!: Rap Music’s Rise to Prominence in the Aftershock of Black Power
by Marcus Reeves

Book Description:
For many African Americans of a certain demographic the sixties and seventies were the golden age of political movements. The Civil Rights movement segued into the Black Power movement which begat the Black Arts movement. Fast forward to 1979 and the release of Sugarhill Gang’s "Rapper’s Delight." With the onset of the Reagan years, we begin to see the unraveling of many of the advances fought for in the previous decades. Much of this occurred in the absence of credible, long-term leadership in the black community. Young blacks disillusioned with politics and feeling society no longer cared or looked out for their concerns started rapping with each other about their plight, becoming their own leaders on the battlefield of culture and birthing Hip-Hop in the process. In Somebody Scream, Marcus Reeves explores hip-hop music and its politics. Looking at ten artists that have impacted rap—from Run-DMC (Black Pop in a B-Boy Stance) to Eminem (Vanilla Nice)—and puts their music and celebrity in a larger socio-political context. In doing so, he tells the story of hip hop’s rise from New York-based musical form to commercial music revolution to unifying expression for a post-black power generation.

More books like Somebody Scream!: Rap Music’s Rise to Prominence in the Aftershock of Black Power may be found by selecting the categories below: