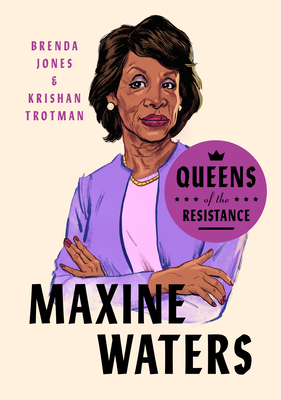 Queens of the Resistance: Maxine Waters
by Brenda Jones and Krishan Trotman

Hardcover Description:
Part of the four-book Queens of the Resistance series, saluting some of the most beloved boss ladies in Congress: a celebration of Representative Maxine Waters, who reclaimed her time and led the first calls for impeachment Maxine Waters is an icon for a generation of women powerbrokers in politics. She is an "unbought and unbossed" acolyte of all the legendary firebrands, like Shirley Chisholm, Barbara Jordan, Tupac, and Malcolm X. The daughter of a single mom from St. Louis, she’s smart, sassy, and an outright firecracker. She is the first woman of color, and the first person of color, to regulate the boyz at the big banks as the powerful chair of the House Financial Services Committee. Auntie Maxine called out the crimes and corruption of this Oval Office with precision before anyone else dared to take a stand. Make no mistake, she is coming for the "king," and whenever she aims, Maxine Waters doesn’t miss. With illustrations, deep research, and writing as endlessly quotable as she is, Queens of the Resistance pays tribute to this phenomenal woman. About the series: Each book of the Queens of the Resistance series will be a celebration of the rebellion against the oppression of women and an embracement of the new in the United States government. The series is adorned with sass, discernment, and the badassery of the present and future leadership. The Doomsday Clock is at a minute to midnight, and the patriarchal power grid that lights "the shining city on a Hill" is about to black out. It’s time to yield to the alternative—the power of women.

More books like Queens of the Resistance: Maxine Waters may be found by selecting the categories below: