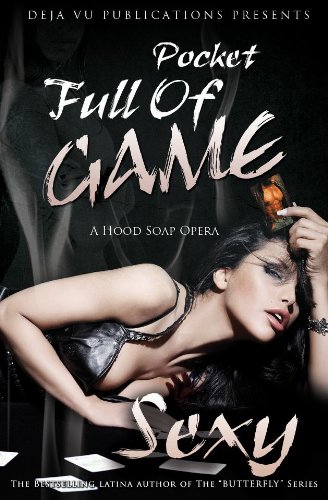 Pocket Full Of Game
by Deborah Cardona a.k.a “Sexy”

Book Description:
Porsche Garcia is a female hustla who has it all; money, beauty, and respect in the slums of Spanish Harlem. She has earned it all by faithfully respecting the laws and codes of the dope game, and by being loyal to those around her while also protecting her position with the viciousness of a Pit bull whenever need be. Porsche is more than satisfied with her life until a chance encounter with a stick up kid named Fresh opens her world to a life of guns and ski masks. A possible newfound love offers her more money than even a seasoned hustla like herself can resist. The combination of Porsche s beauty and Fresh s talents as a stick up kid seems like a match made in Heaven. The two of them, along with Fresh s crew, show no mercy as they rob high level drug dealers around Spanish Harlem and do their part in running up New York City s murder rate. Success seems to be in the palm of their hands until one bad decision drastically changes one of their lives forever and puts both partners against each other. Friends become enemies, love becomes jealousy, and loyalty becomes a thing of the past. With fresh and Porsche now on opposite sides of the playing field and Karma s revenge beginning to catch up, the both of them are forced to learn a lesson which only one of them will survive… In life you can only go but so far with just a Pocket Full Of Game!!!

Tell us what do you think about Pocket Full Of Game.