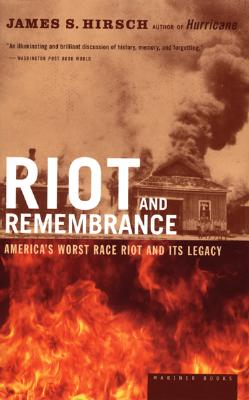 Riot and Remembrance: The Tulsa Race War and Its Legacy
by James S. Hirsch

Read Our Review of Riot and Remembrance: The Tulsa Race War and Its Legacy

Paperback Description:
A best-selling author investigates the causes of the twentieth century’s deadliest race riot and how its legacy has scarred and shaped a community over the past eight decades. On a warm night in May 1921, thousands of whites, many deputized by the local police, swarmed through the Greenwood section of Tulsa, Oklahoma, killing scores of blacks, looting, and ultimately burning the neighborhood to the ground. In the aftermath, as many as 300 were dead, and 6,000 Greenwood residents were herded into detention camps. James Hirsch focuses on the de facto apartheid that brought about the Greenwood riot and informed its eighty-year legacy, offering an unprecedented examination of how a calamity spawns bigotry and courage and how it has propelled one community’s belated search for justice. Tulsa’s establishment and many victims strove to forget the events of 1921, destroying records pertaining to the riot and refusing even to talk about it. This cover-up was carried through the ensuing half-century with surprising success. Even so, the riot wounded Tulsa profoundly, as Hirsch demonstrates in a compelling combination of history, journalism, and character study. White Tulsa thrived, and the city became a stronghold of Klan activity as workingmen and high civic officials alike flocked to the Hooded Order. Meanwhile, Greenwood struggled as residents strove to rebuild their neighborhood despite official attempts to thwart them. As the decades passed, the economic and social divides between white and black worlds deepened. Through the 1960s and 1970s, urban renewal helped to finish what the riot had started, blighting Greenwood. Paradoxically, however, the events of 1921 saved Tulsa from the racial strife that befell so many other American cities in the 1960s, as Tulsans white and black would do almost anything to avoid a reprise of the riot. Hirsch brings the riot’s legacy up to the present day, tracing how the memory of the massacre gradually revived as academics and ordinary citizens of all colors worked tirelessly to uncover evidence of its horrors. Hirsch also highlights Tulsa’s emergence at the forefront of the burgeoning debate over reparations. RIOT AND REMEMBRANCE shows vividly, chillingly, how the culture of Jim Crow caused not only the grisly incidents of 1921 but also those of Rosewood, Selma, and Watts, as well as less widely known atrocities. It also addresses the cruel irony that underlies today’s battles over affirmative action and reparations: that justice and reconciliation are often incompatible goals. Finally, Hirsch details how Tulsa may be overcoming its horrific legacy, as factions long sundered at last draw together.

Books similiar to Riot and Remembrance: The Tulsa Race War and Its Legacy may be found in the categories below: