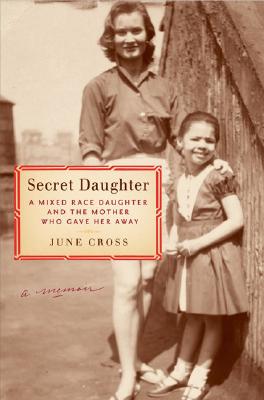 Secret Daughter: A Mixed-Race Daughter and the Mother Who Gave Her Away
by June Cross

Book Description:
A powerful memoir about the complicated but ultimately loving relationship between a black daughter and her white mother Secret Daughter is a deftly drawn and moving portrait of a childhood spent in two very different worlds: one white, one black. In 1957, when June Cross was four years old, she was sent by her white mother to live with a black family in Atlantic City. Her mother, Norma, had left June’s abusive father, a comic in the well-known black vaudeville duo Stump and Stumpy, and gave June up when it became clear that her dark-skinned, kinky-haired child could no longer "pass." Within her adopted family, June struggled with her identity as the black radicalism of the times collided head on with her family’s more traditional ideals. Summer vacations were spent with her mother, now in Hollywood and married to F Troop TV actor Larry Storch. For many years, Norma, afraid that Larry’s career would suffer if anyone discovered the truth about her illegitimate daughter, told friends and reporters that June was adopted. Secret Daughter, which grew out of Cross’s Emmy Award winning documentary, traces this thorny story with poignancy and skill. It is both a vivid snapshot of race relations in America and an inspiring journey of understanding between a mother and daughter.

More books like Secret Daughter: A Mixed-Race Daughter and the Mother Who Gave Her Away may be found by selecting the categories below:

Tell us what do you think about Secret Daughter: A Mixed-Race Daughter and the Mother Who Gave Her Away.