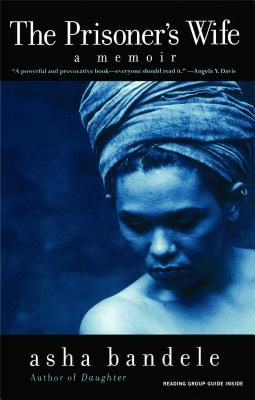 The Prisoner’s Wife
by asha bandele

“This is a terrifying, heart-breaking and, ultimately, important book. While bandele’s narrative offers a profound prescription for an entire population in exile, it also serves as a fundamental text for the rest of us living/learning/moving toward (with or without) love. The Prisoner’s Wife can be our talisman, our healing potion, how we keep breathing— as they lock us up in numbers beyond comprehension, The Prisoner’s Wife reminds us that we can survive, even if it is only two at a time.”
—Junot Diaz, author of Drowning

How did a beautiful, talented college student fall in love with a man serving twenty to life for murder? And why did she marry him? At a time when one in four black men are caught in the web of the criminal justice system, Asha Bandele shatters the myths of prisoners’ wives and tells a story of embracing the beauty of love in the ugliest circumstances and of people’s ability to change, to do better, to grow. Whether she is describing her restricted but romantic courtship with Rashid - when letters were like dates, like.”.hispers on the slow, blue-light dance floo.”.- or riding the bus upstate with the other wives and girlfriends, Asha Bandele creates haunting images and reflections so powerful and unique that they beg to be reread and savored. At the same time that she recalls the extreme ups and downs that accompany a relationship constantly scrutinized by guards and surveillance cameras, she confronts her own dark secrets and sadness. The love of a man with an ugly past but a firm belief in redemption is what heals her broken spirit and grants her the courage and confidence to embrace life again.

This powerful book was the source of many posts on Thumper’s Corner the AALBC.com discussion board here are excerpts of just a few comments

”…We have to be very careful when we stereotype people without having a wide-scoped understanding of the conditions about which we are commenting.

Currently 72% of ALL inmates in American prisons, both state and federal are in prison for non-violent offenses. Nearly 70% are people of color, and the majority of the crimes are either substance-related (drugs) or “.ustenance-relate.”.(that is, breaking the law to to make a living) Most imprisoned Americans are undereducated, low-income, men of color—and they are likely to stay undereducated and low-income if they don’t have viable options for bettering themselves.

Women with low self-esteem are everywhere, including in prison visiting rooms, but they are also married to ministers, doctors and judges.

Strong women who love themselves are everywhere as well—Which means it is not impossible to find articulate, attractive, moral, spiritually strong sistas standing by an inmate and patiently waiting to be the better half he’ll need if he’s going to one day be the man God created him to be.

They are already fighting an uphill battle… They don’t need the additional burden of being seen in society’s eyes as desperate and lacking in self-esteem….”
’Kathleen Cross, author of Skin Deep

“…I have to admit up front it always amazes me when I hear about a brother, who is imprisoned, that manages to find a woman—any woman—to marry him. I generally concluded that these women have low self esteems or semi retarded. Then came ashe.

Attractive, articulate, compassionate, and educated. After hearing her describe her situation it made sense and I felt shallow. It is a compelling story…”
’Troy Johnson, AALBC.com Founder

“…I have stopped feeling tired for black men who make bad choices. Life is full of opportunities for anyone who sees it as such. Creating your life’s actions around choices that are self defeating is pitiful. I keep hearing stories of ’poor pitiful black men’ well I’m sorry. If black women can raise children, get themselves educated, look after relatives and aging parents, run organizations and businesses and still live a racist and sexist society and then still ’got cha back for black men’ I think it’s high time that self pitying brotha man start helping themselves, their communities, etc….If you are pitiful it is because you have taken the imagination that someone else has of you and made it your own. (and no I am not a conservative, republican, etc…”
’Posted by.”.east We forge.”

Books similiar to The Prisoner’s Wife may be found in the categories below: