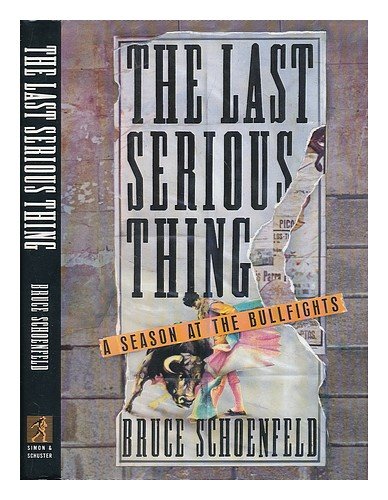 Last Serious Thing: A Season at the Bullfights
by Bruce Schoenfeld

Bullfighting is the vivid focus of this absorbing portrait of Spain—a nation poised ambivalently on the cusp between past and future. The Last Serious Thing is about the spectacle of bullfighting: its technique, its present heroes, its resplendent history, its place in the world. But it is also a probing work about Spain and the Spanish soul—a book as deeply perceptive as any by Bruce Chatwin or Jan Morris. Set in the historic city of Seville, now poised to be transformed by the events of 1992—the Spanish Olympics, the World’s Fair, the new unified market of Europe—The Last Serious Thing sweeps the reader into the spectacular pageantry of bullfighting—the romantic, deadly art that to countless proud Spaniards symbolizes all that is best and bravest about their country. As we learn the history and lore of the toreo and meet the array of matadors who command modern bullfighting, we see the ongoing conflict between

More books like Last Serious Thing: A Season at the Bullfights may be found by selecting the categories below: