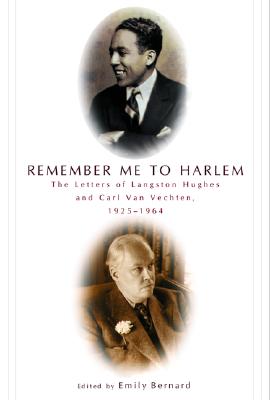 Book Description:
These engaging and wonderfully alive letters paint an intimate portrait of two of the most important and influential figures of the Harlem Renaissance. Carl Van Vechten—older, established, and white—was at first a mentor to the younger, gifted, and black Langston Hughes. But the relationship quickly grew into a great friendship—and for nearly four decades the two men wrote to each other expressively and constantly.

They discussed literature and publishing. They exchanged favorite blues lyrics ("So now I know what Bessie Smith really meant by ’Thirty days in jail / With ma back turned to de wall,’" Hughes wrote Van Vechten after a stay in a Cleveland jail on trumped-up charges). They traded stories about the hottest parties and the wildest speakeasies. They argued politics. They gossiped about the people they knew in common—James Baldwin, W. E. B. Du Bois, Ralph Ellison, Zora Neale Hurston, H. L. Mencken. They wrote from near (of racism in Scottsboro) and far (of dancing in Cuba and trekking across the Soviet Union), and always with playfulness and mutual affection.

Today Van Vechten is a controversial figure; some consider him exploitative, at best peripheral to the Harlem Renaissance—or, indeed, as the author of the novel Nigger Heaven, a blemish upon it, and upon Hughes by association. The letters tell a different, more subtle and complex story: Van Vechten did, in fact, help Hughes (and many other young black writers) to get published; Hughes in turn appreciated what Van Vechten was trying to do in Nigger Heaven and defended him, fiercely. For all their differences, Hughes and Van Vechten remained staunchly loyal to each other throughout their lives.

A correspondence of great cultural significance, judiciously gathered together here for the first time and annotated by the insightful young scholar Emily Bernard, Remember Me to Harlem shows us an unlikely friendship, one that is essential to our understanding of literature and race relations in twentieth-century America.

More books like Remember Me to Harlem: The Letters of Langston Hughes and Carl Van Vechten, 1925-1964 may be found by selecting the categories below:

Tell us what do you think about Remember Me to Harlem: The Letters of Langston Hughes and Carl Van Vechten, 1925-1964.