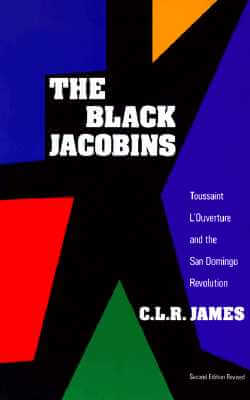 The Black Jacobins: Toussaint L’Ouverture and the San Domingo Revolution
by C.L.R. James

A classic and impassioned account of the first revolution in the Third World.

This powerful, intensely dramatic book is the definitive account of the Haitian Revolution of 1794-1803, a revolution that began in the wake of the Bastille but became the model for the Third World liberation movements from Africa to Cuba. It is the story of the French colony of San Domingo, a place where the brutality of master toward slave was commonplace and ingeniously refined. And it is the story of a barely literate slave named Toussaint L’Ouverture, who led the black people of San Domingo in a successful struggle against successive invasions by overwhelming French, Spanish, and English forces and in the process helped form the first independent nation in the Caribbean.

Claims that white abolitionist leader William Lloyd Garrison “started” the abolition movement and influenced the thinking of his black colleagues (when in fact it was the other way around) can be found in books published in the last decade. It’s not difficult to figure out what is at play here and why these narratives persist: white supremacy depends upon the notion that freedom and rights, when attained, are “granted” to blacks by benevolent whites, who then can distance themselves from their racist history through their purported efforts at salvation.

The Haitian Revolution disturbs these comforting assumptions. The Haitian Revolution was, as C. L. R. James noted in his classic Black Jacobins, “the only successful slave revolt in history,” and it was planned and carried out by the enslaved blacks of the French colony of Saint Domingue themselves, who effected their own transformation from “slaves, trembling in hundreds before a single white man, into a people able to organise themselves and defeat the most powerful European nations of their day.”

African Americans and other oppressed people, from the time of the Haitian Revolution until today, have been inspired by its success and the Haitians’ attainment of freedom and, ultimately, an independent nation in 1804. White Americans, though, were threatened in the antebellum period by the implications that their own investment in a republic dependent upon slavery was insecure; ever since, they have ignored the Haitian Revolution altogether, denied Haitians’ own agency in their struggle

More books like The Black Jacobins: Toussaint L’Ouverture and the San Domingo Revolution may be found by selecting the categories below: