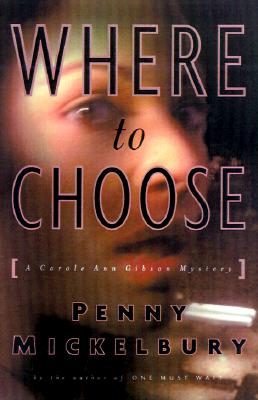 Where to Choose: A Novel
by Penny Mickelbury

Read an Excerpt from Where to Choose: A Novel

Hardcover Description:
As a lawyer, Carole Ann Gibson defended every kind of criminal — from the white collar crooks who stole with pens and computers to the low-level hoods who stole with guns and knives. The one truth she learned was that justice and the law are sometimes only distantly related. After Carole Ann walked away from her law practice, she thought she was through dealing with the violent class. But when she learns that her mother’s best friend has been attacked in the old neighborhood, she gets on the next plane home — and finds that the place where she grew up is in trouble and that the police don’t care. Carole Ann decides that this time she’s going to make sure justice is done. This neighborhood used to be one of Los Angeles’s little jewels — a few peaceful blocks that had always been home to a mix of races and cultures that somehow managed to all get along. But now attacks have become common and fear prevades every life. No one knows where the trouble is coming from; they only know the rules of survival. Don’t go out after dark, don’t go out alone, and don’t think that the police are going to do anything to help. Beyond that, the only thing they can think of doing is give up. And that’s the one thing that Carole Ann doesn’t know how to do. So when she starts trying to find the source of the attacks and the reason for the police indifference, she finds not only her neighborhood but herself under attack. And her attackers don’t just want to hurt her, they want her dead. Penny Mickelbury has created a marvelous character in Carole Ann Gibson, a brilliant, caring lawyer who likes to win but knows that there is a price for victory, and who is determined not to allow that price to be her own humanity. Critics have already said that Penny Mickelbury has "the stuff to be a superstar." In Where to Choose, she shows why she is truly one of the great mystery writers of today.

More books like Where to Choose: A Novel may be found by selecting the categories below: