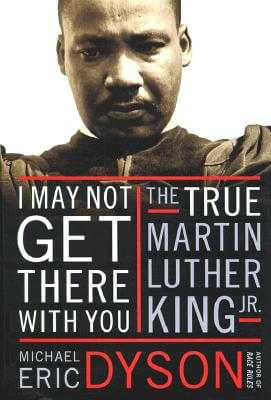 I May Not Get There with You: The True Martin Luther King, Jr.
by Michael Eric Dyson

Hardcover Description:
Where is Martin Luther King, Jr. when we need him? So much has changed since the glory days of the civil rights movement — and so much has stayed the same. African Americans command their place at every level of society, from the lunch counter to the college campus to the corporate boardroom — yet the gap between the American middle class and the black poor is as wide as ever. Hollywood casts a black actor as president of the United States without provoking a word of protest, but a black man is savagely dragged to his death because of the color of his skin. The hip-hop culture that springs from the imaginations of urban black youth (who are themselves reviled and feared) sweeps across the malls and high schools of suburbia, yet black students still sit together, apart, in the cafeteria. Where can we turn to find the vision that will guide us through these strange and difficult times? Michael Eric Dyson helps us find the answer in our recent past, by resurrecting the "true" Martin Luther King, Jr. A private citizen who transformed the world around him, King was arguably the greatest American who ever lived. Yet, as Dyson so poignantly reveals, Martin Luther King, Jr. has disappeared in plain sight. Despite the federal holiday, the postage stamps, and the required reference in history textbooks, King’s vitality and complexity have faded from view. Young people do not learn how radical he was, liberals forget that he despaired of whites even as he loved them, and contemporary black leaders tend to ignore the powerful forces that shaped him — the black church, language, and sexuality — thereby obscuring his relevance to black youth and hip-hop culture. Instead, King’s legacyhas become a battlefield on which various forces wage war — whether it is conservatives who appropriate his words to combat affirmative action, or the King family themselves, who want to control use of the great man’s words for a fee. Former welfare dad, Princeton Ph.D., and Baptist preacher, Michael Eric Dyson sets out to find the man who was assassinated when Dyson himself was a nine-year-old boy living in downtown Detroit. And in his quest to unravel the meaning of King, Dyson discovers that the very contradictions embodied in the slain leader’s life make him a man for our times. He returns to us a man as radical in his view of social injustice as Malcolm X, who still won the support of the white establishment; a man dedicated to the common good, who gave in to his own appetites; a master of language and rhetoric, who "sampled" the words and ideas of others; a man who despised the unjust distribution of wealth and used its fruits to feed his own people. Dyson rescues from history a Martin Luther King, Jr. who matters "today: " a man who has as much in common with rap artist Tupac Shakur as he does with the Reverend Ralph Abernathy. Unafraid to confront King’s personal life, determined to defend King from the sanitizing forces of historical amnesia, Michael Eric Dyson challenges us to embrace the man who said, prophetically, on the eve of his death, "I May Not Get There With You," and to make him our partner in our ongoing struggle to get to the Promised Land.

Books similiar to I May Not Get There with You: The True Martin Luther King, Jr. may be found in the categories below: