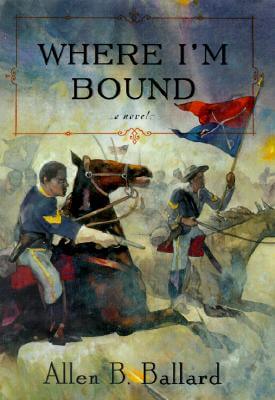 Where I’m Bound: A Novel
by Allen Ballard

Hardcover Description:
"Where I’m Bound," a stunning and engaging Civil War novel, is the first work of fiction to focus solely on the soldiers of an African-American regiment. Throughout the war, more than 180,000 African-American men fought for the Union Army. Many were escaped slaves, others were freed men; yet all voluntarily enlisted for one cause: freedom. For the first time in fiction, their experiences are successfully portrayed in a manner befitting the grandeur and scope of their contributions. Inspired by the true story of a black cavalry unit in Mississippi, renowned African-American historian Allen Ballard weaves factual events with the fictional account of an escaped slave, Joe Duckett, who flees to join the Northern Army. When Duckett escapes his life of bondage to become a cavalry scout, he grows to be more than a free man — he becomes a hero. Duckett and his hard-riding regiment roam the Mississippi Delta, freeing slaves and keeping vital waterways open for the Union. As the war approaches its final, tragic days, Duckett embarks on his most dangerous mission yet: to return to the plantation from which he escaped in order to reunite with his wife and daughter. More than just an account of the Civil War, "Where I’m Bound" is an affecting portrayal of the psychological effects of war. Through the character Duckett, some of war’s greatest tragedies are painfully evoked — the agonizing separation from family, the horrendous mission of having to kill another man, and the cruelty and moral corruption that occur when men’s passions are their greatest weapons against one another. This story of one man’s ability to meet such overwhelming challenges brings to life the noble fight forfreedom as displayed by African-American soldiers as well as the effects of that fight on an entire country and culture. Dr. Ballard’s first work of fiction is a striking blend of historical fact and dramatic storytelling brilliantly illustrating the accomplishments of African-American Civil War soldiers. "Where I’m Bound" is destined to become a classic novel of the Civil War.

More books like Where I’m Bound: A Novel may be found by selecting the categories below: