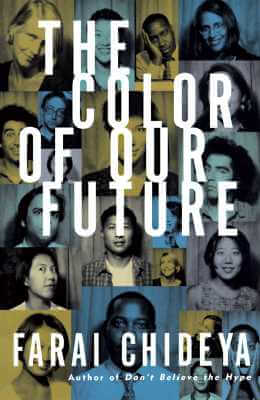 The Color of Our Future : Our Multiracial Future
by Farai Chideya

Hardcover Description:
Since the Civil Rights movement, most Americans have thought of race as a black and white issue. That won’t be the case for long. By the year 2050, there will be more nonwhite than white Americans, and most of the nonwhite population will be Asian and Latino, not black. Increasingly, America is becoming a multiracial society. Americans in their teens and twenties are at the forefront of this cultural revolution. In The Color of Our Future, young journalist Farai Chideya explores how members of the next generation deal with race in their own lives and how the decisions they make determine America’s ethnic future. From urban hoods to Native American reservations to lily-white small towns, Chideya talks to young men and women about their personal views of race, painting a vivid portrait of a nation in transition. In clear, compelling language, she describes young people dealing with the complexities of diversity in their everyday lives. She writes of a young interracial couple pitted against their community in the South and of the white teens in Indiana, birthplace of the Klan, who get their black, hip-hop aesthetic from MTV. She interviews a Native American who wants to be the next Bill Gates, bringing computer access to his reservation in Montana, and a Mexican-American woman, working for the border patrol in El Paso, who catches the destitute Mexicans who flock into the United States to work for affluent white Texans. All these young people have clear, strong ideas about the impact of race on everything from education to pop culture. They are honest, sometimes brutally so, about their own prejudices. Their moving stories are the blueprint for the future of America. With a discerning ear and sharp insight, Chideya allows the voices of the next generation(black, white, Latino, Asian, Native American, and multiracial(to ring out with truth and clarity and guide us to the kaleidoscope of our future.

Books similiar to The Color of Our Future : Our Multiracial Future may be found in the categories below: