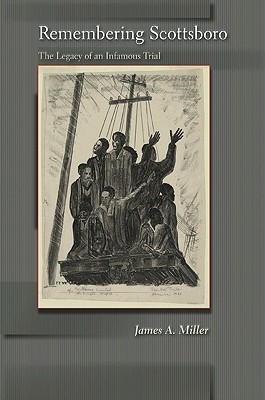 Remembering Scottsboro: The Legacy of an Infamous Trial
by James A. Miller

Book Description:
In 1931, nine black youths were charged with raping two white women in Scottsboro, Alabama. Despite meager and contradictory evidence, all nine were found guilty and eight of the defendants were sentenced to death—making Scottsboro one of the worst travesties of justice to take place in the post-Reconstruction South. Remembering Scottsboro explores how this case has embedded itself into the fabric of American memory and become a lens for perceptions of race, class, sexual politics, and justice. James Miller draws upon the archives of the Communist International and NAACP, contemporary journalistic accounts, as well as poetry, drama, fiction, and film, to document the impact of Scottsboro on American culture. The book reveals how the Communist Party, NAACP, and media shaped early images of Scottsboro; looks at how the case influenced authors including Langston Hughes, Richard Wright, and Harper Lee; shows how politicians and Hollywood filmmakers invoked the case in the ensuing decades; and examines the defiant, sensitive, and savvy correspondence of Haywood Patterson—one of the accused, who fled the Alabama justice system. Miller considers how Scottsboro persists as a point of reference in contemporary American life and suggests that the Civil Rights movement begins much earlier than the Montgomery Bus Boycott of 1955. Remembering Scottsboro demonstrates how one compelling, provocative, and tragic case still haunts the American racial imagination.

More books like Remembering Scottsboro: The Legacy of an Infamous Trial may be found by selecting the categories below: