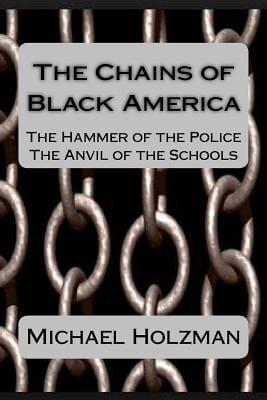 The Chains of Black America: The Hammer of the Police; The Anvil of the Schools
by Michael H. Holzman

The Chains of Black America: The Hammer of the Police: The Anvil of the Schools is a description of how two great institutions of American government—the education and criminal justice systems—often hinder, rather than enable, the achievement of equal opportunities for the descendants of enslaved Africans.

The book is about the caste status of African Americans, rather than about “people of color,” or impoverished Americans, because of the specific history of African Americans and the way in which their oppression affects others. It is perhaps not too much to say that until descent from enslaved Africans is no longer a cause for lack of equality of opportunity, the United States will never be a just society.

Each chapter, beginning with the national survey in Chapter One, includes demographic, health, income, wealth, and economic mobility data, followed by sections on the criminal justice and education systems and concluding with attempts at modeling a more equitable society. This modeling is extended nationally in a final chapter.

There are chapters on eight cities: Chicago, Cleveland, Memphis, Milwaukee, New Orleans, New York City, Philadelphia, and Rochester, New York. Each of these has a significant, highly segregated, African American population. In each, African American incarceration rates are many times higher than those of White, non-Hispanics, and educational outcomes are much less favorable for African American than for White, non-Hispanic, students. There are many other cities where these conditions prevail, such as Minneapolis, Buffalo, Montgomery and Miami, but eight examples should suffice as examples of how caste is enforced in America.

Books similiar to The Chains of Black America: The Hammer of the Police; The Anvil of the Schools may be found in the categories below: