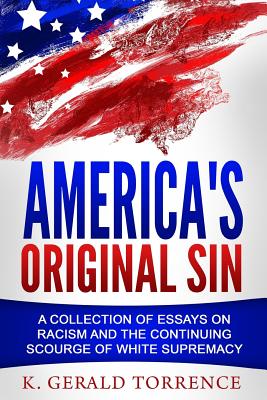 America’s Original Sin: A Collection of Essays on Racism and the Continuing Scourge of White Supremacy
by K. Gerald Torrence

Paperback Description:
CAN YOU HANDLE THE TRUTH?

This powerful work by K. Gerald Torrence is a collection of thirty-four reflective essays that explore the gritty truth about structural racism and white privilege in America.

Torrence is interested in nothing more and nothing less than the truth. And in America’s Original Sin, he explores the painful truth about the four-hundred-year odyssey of the Negro in America—the scourge of racism that stretches back to the arrival of the first slave ship in 1619 and continues today, insidiously, despite the election of the nation’s first black president.

Exposing the delusional falsehoods that keep the troubling reality of black lives hidden from view, this book speaks truth to the economic, political, and social forces that collude, with ample help from the mainstream media, to sweep the lack of progress toward freedom and equality under the rug. From cable news to professional sports to the US Justice Department and President Barack Hussein Obama himself, no one and no topic is off limits as Torrence takes readers on a fearlessly honest journey through the eyes of today’s African-American.

With the naked truth exposed, America’s Original Sin ultimately issues a call to mobilize a return to the rich heritage of black America.

More books like America’s Original Sin: A Collection of Essays on Racism and the Continuing Scourge of White Supremacy may be found by selecting the categories below: