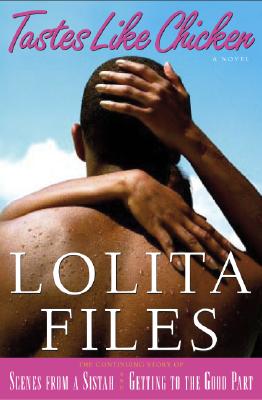 Tastes Like Chicken: A Novel (Files, Lolita)
by Lolita Files

Hardcover Description:
It’s the return of the sistahs! Tastes Like Chicken is Lolita Files’s much anticipated continuing story of the lives of Misty Fine and Reesy Snowden, the dynamic heroines of the bestselling novels Scenes from a Sistah and Getting to the Good Part. With steamy thrills and disastrous infidelities, Lolita’s latest is a tale of two women who find themselves poised at life’s crossroads with everything to lose but their friendship. What’s a girl to do when she finds out her man’s been feeding her lies? When readers last saw them, Misty had just married her dream man, Rick Hodges, and was off on a fabulous honeymoon. On an equally hopeful note, a pregnant and newly engaged Reesy was riding off into the sunset with her fiancé — reformed ladies’ man Dandre Hilliard. But it isn’t long before the men start misbehaving again, and in Tastes Like Chicken, they get what’s coming to them. Reesy gets the shock of her life on her wedding day, when a vengeful stranger delivers an ugly surprise that gives her serious doubts about the man she loves. Reesy doesn’t stick around to hear more bad news — she hightails it to California, leaving her old life and her fiancé behind. Dandre is fast on her heels trying to prove the legitimacy of his feelings, but those California girls prove to be a dangerous distraction, and Reesy herself finds some racy excitement in the heady world of L.A. casting calls and nightclub scenes. Meanwhile, back on the East Coast, family and friends of both women are wrestling with their own relationship problems. A seductive interloper threatens to upset Reesy’s parents’ marriage, and Misty and Rick get a surprise of their own, which forces Misty to confront some shocking truths about the man she married. With her best friend on the other side of the country, Misty can only hope that she doesn’t have to face the future alone. As fans of these savvy, sexy women know, not much can keep Reesy and Misty from their ultimate dream of "having it all." Filled with the humor and personal drama that made her first books national bestsellers, Lolita Files’s Tastes Like Chicken takes the sistahs — and readers — on their wildest ride yet.

More books like Tastes Like Chicken: A Novel (Files, Lolita) may be found by selecting the categories below: