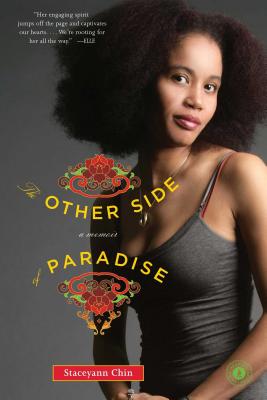 The Other Side of Paradise: A Memoir
by Staceyann Chin

Paperback Description:
Staceyann Chin has appeared on television and radio discussing issues of race and sexuality, but it is her extraordinary voice that launched her career as a performer, poet, and activist—here, she shares her unforgettable story of triumph against all odds in this brave and fiercely candid memoir. No one knew Staceyann’s mother was pregnant until a dangerously small baby was born on the floor of her grandmother’s house in Lottery, Jamaica on Christmas Day. Staceyann’s mother did not want her and her father was not present—no one, except her grandmother, thought Staceyann would survive. It was her grandmother who nurtured and protected and provided for Staceyann and her older brother in the early years. But when the three were separated, Staceyann was thrust, alone, into an unfamiliar and dysfunctional home in Paradise, Jamaica. There, she faced far greater troubles than absent parents. So, armed with a fierce determination and exceptional intelligence, she discovered a way to break out of this harshly unforgiving world. Staceyann Chin, acclaimed and iconic performance artist, now brings her extraordinary talents to the page in a brave, lyrical, and fiercely candid memoir about growing up in Jamaica. She plumbs tender and unsettling memories as she writes about drifting from one home to the next, coming out as a lesbian, and finding the man she believes to be her father and ultimately her voice. Hers is an unforgettable story told with grace, humor, and courage.

Books similiar to The Other Side of Paradise: A Memoir may be found in the categories below: