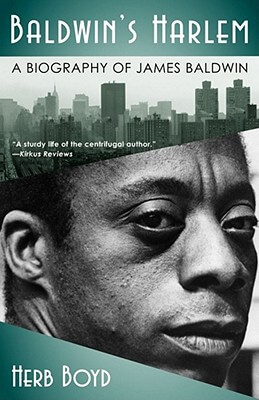 Baldwin’s Harlem: A Biography of James Baldwin
by Herb Boyd

Perhaps no other writer is as synonymous with Harlem as James Baldwin (1924-1987). The events there that shaped his youth greatly influenced Baldwin’s work, much of which focused on his experiences as a black man in white America. Go Tell It on the Mountain, The Fire Next Time, Notes of a Native Son, and Giovanni’s Room are just a few of his classic fiction and nonfiction books that remain an essential part of the American canon.

In Baldwin’s Harlem, award-winning journalist Herb Boyd combines impeccable biographical research with astute literary criticism, and reveals to readers Baldwin’s association with Harlem on both metaphorical and realistic levels. For example, Boyd describes Baldwin’s relationship with Harlem Renaissance poet laureate Countee Cullen, who taught Baldwin French in the ninth grade. Packed with telling anecdotes, Baldwin’s Harlem illuminates the writer’s diverse views and impressions of the community that would remain a consistent presence in virtually all of his writing.

More books like Baldwin’s Harlem: A Biography of James Baldwin may be found by selecting the categories below: