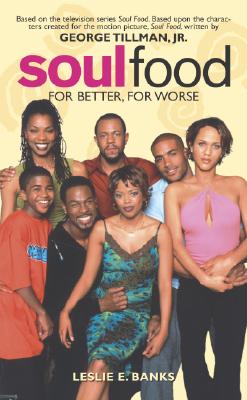 Mass Market Paperback Description:
First the hit movie.
Then the groundbreaking television show.
Now the smart and sassy book series. SOUL FOOD Sisters at heart. Sisters through it all…. Baby sister Bird and her husband, Lem, are having a rough time. Lem has a secure job with his brother-in-law Kenny, but he still feels like the charity case of the family — and he wants to make it on his own with his own business. But with his checkered past, Lem knows it will be tough to find anyone to front him the cash — legally, at least. Lem’s attempt to get the money on the sly brings him into conflict with Bird’s eldest sister, Teri, who finds out that Lem may be slipping into his old, shady habits. When Bird learns of this, the stress of worrying about her husband, her business, and her future proves too much, and her health begins to suffer badly — bringing her family together, and forcing Bird and Lem to decide how much they mean to each other, and whether they’re willing to risk losing their dreams and everything they’ve worked for.

More books like For Better, For Worse (Soul Food Series) may be found by selecting the categories below: