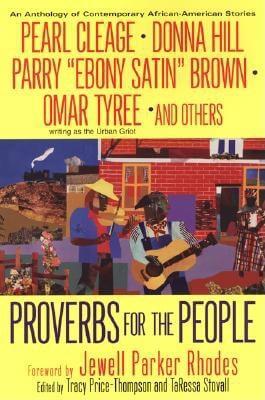 Book Description:
If you can walk, you can dance. If you can talk, you can sing." "Don’t start none, won’t be none." "If you don’t stand for something you’ll fall for anything." Whether it was in the church on a hard-shined wooden pew, or around the kitchen table after, listening to the wisdom of mothers and fathers, aunts and uncles, grandparents, friends, and leaders, the messages of the proverbs resonate in the souls of most African-Americans—a sweet refrain heard through striving, reaching, loving, and living. In this powerful collection of stories based on African, African-American, and Biblical proverbs, some of today’s most exciting new African-American writers tackle the unifying themes, delicious wit and undeniable wisdom of the proverbs, making them sing for a whole new generation. In the moving "Love Can Move Mountains," author Elizabeth Atkins Bowman explores the meaning of the African-American saying, "Mountain, get out of my way!" in a story about the miraculous, mysterious power of a mother’s stand-firm love. In Arethia Hornsby’s "My Momma Said ," two friends go out on the town and get schooled in a life lesson that proves the truth behind the ages-old African-American proverb, "Never judge a book by its cover." Town gossip gets the best of a loyal wife and gives credence to C.F. Pope’s saying, "Never declare war unless you mean to do battle," in Gwynne Forster’s wry tale of comeuppance, "First Thing Monday Morning." And in the flirty short story, "Something Special," Venise Berry shows what the Cape Verde Islands maxim, "Every week has its Friday" really means as one woman’s weekly ritual promises seven days’ worth of sensual satisfaction. In addition to such established writers as Pearl Cleage, Omar Tyree, Margaret Johnson-Hodge, Timmothy McCann, Brandon Massey, Kambon Obayani, Earl Sewell, Maxine Thompson, and others, here, too, are rising stars in the African-American literary world, including fourteen-year-old Kharel Price and fifteen-year-old Tierra French, proving that the wisdom of the past lives on in the next generation. From the struggle to break the chains of the past, (Pat G’Orge-Walker’s "The Consequence") to the fight to keep hope alive in the face of injustice, (Robert Fleming’s "A Crisis of Faith"), from the joys of loving an older woman (Parry "Ebony Satin" Brown’s "Ain’t Nobody’s Business If I Do"), to an African man’s discovery of his own America (Amanda Ngozi Adichie’s "Women Here Drive Buses"), this triumphant, stirring anthology is a glorious reminder of the power of proverbs to heal, to provoke, to unify, and to inspire.

More books like Proverbs For The People: Contemporary African-American Stories may be found by selecting the categories below:

Tell us what do you think about Proverbs For The People: Contemporary African-American Stories.