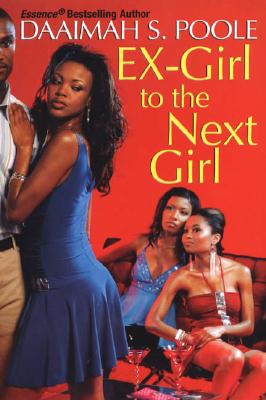 Ex-Girl To The Next Girl
by Daaimah S. Poole

Book Description:
In Daaimah S. Poole’s sizzling new novel, three sistahs and three bruthahs are playin’a game of love where the only rule is anything goes . . .

Ever since Shonda stole Malik from his fianc eat the altar, no lessshe’s believed that marrying him would be her ticket to happiness. But when it finally happens, Shonda is in for a rude awakening. . .

Meanwhile, Malik’s ex-fianc e, Kim, has had a year to get over the nightmare that was supposed to be her wedding day. She manages to pull it together despite the news that Malik actually married the bitch who spoiled her nuptials. Just as she opens up to the idea of a new love, Kim meets a new man. . .who happens to be white. Is he the one she’s been looking for?

After two years with her boyfriend Rodney, twenty-five-year-old Nadine Clark wants to see what else is out there. But Nadine soon discovers being single isn’t what she’d imagined. Dejected, Nadine takes up with Malik, a man she believes is free. But when his wife, Shonda, confronts Nadine, everything hits the fan. . .and it isn’t long before everyone involved comes face-to-face with the crazy consequences of getting what they wished for. . .

More books like Ex-Girl To The Next Girl may be found by selecting the categories below: